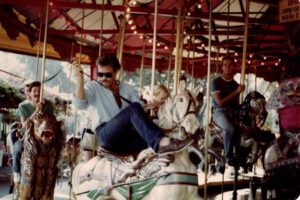 Thanks for being my friend when I was eight years old. Thanks for getting me into so much trouble at school that we had to be separated the following year, because we laughed too much in class together. It wasn’t that uncomfortable hiding in the back of your mom’s Volkswagen Bug after school so I could spend the night. Sleeping on your bean bag chair and waking up with foam beads in my hair actually helped build character. Then you started dating Gayle in high school and broke my heart. But we held on.

36 years ago, we sold everything we owned – dynamite eight-track player, Lloyds stereo, all my 45s – to raise money for Trailways bus tickets from Piedmont, MO to Chicago, IL. At 16 years old, we were finally allowed by law to be runaways. Remember the officer who picked us up fifty miles from home the year before? He informed us, “Missouri law states you need to be sixteen to leave home without your parents’ permission.” Well, okay then.  My birthday was a week apart in February.  So, we left as soon as we could.  We arrived in Chicago on February 14th – at the tail-end of the 1979 great blizzard. The view from the front seat, as the bus did a loop between eight feet high snow drifts on Lake Shore Drive, scared us to death. But we held on.

My desire to be a free soul and your fear of the big city made it difficult for you to  remain in Chicago for long. Your grandmother reached out two months later and promised  private schooling in Arkansas.  With another broken heart, I took you to Union Station in the heart of Chicago and said goodbye. I stood on the Canal street bridge and cried  while I watched trains pull out.  But with a few letters and infrequent phone calls, we still held on.

Two years later you ended up in Anaheim, CA living with your aunt Niecy before living on your own. Not long after, my boyfriend, Jamie and I left Chicago to stay with you and your new boyfriend, Glen. On our first day in California, we spent all day at Disneyland and Knotts Berry Farm.  We drove up to Los Angeles to to see Hollywood.  After a few months of trying to find a job, with our tails between our legs, we went back to Chicago.  It took Jamie and me two more tries over the next two years to finally make the permanent move to California from Chicago. Most of the 80s we spent living in the same neighborhood in West Hollywood, CA.  We lived through some wild and tough times.  It was all worth it. Life would throw us a lot of curves balls through the years, pull us in different directions and sometimes bring a strained silence between us. But silently, hand in hand, we held on.

At 36 years old, you left for good. Already ill, you moved to Pennsylvania with your new partner.  That August I got the call from our dear friend, Rayn.  The awful disease had taken you from the earth.  My dearest best friend, where have you gone? I know somewhere in the stars you are reaching out. And in my dreams, you visit to laugh with me again. Sometimes we talk in dreams about what’s new, and you look as healthy as you were in your twenties. I guess somehow, we still hold on. 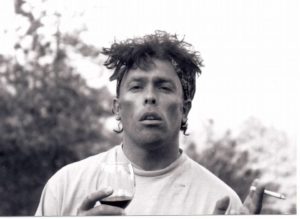 So today is my wish to you for a wonderful day, wherever you may be. May you be laughing with others, encouraging trouble and getting all the attention you deserve. You would have loved 52.